We’ve just received confirmation that at approximately 4:38pm AEDT, Santa Claus has been spotted leaving the North Pole. He was seen climbing aboard his sleigh, being led by his head reindeer, Rudolph.

He appears to be heading south towards Australia, and is expected to arrive late this evening. We believe that if you look outside just before going to bed, it is possible you may see the red of Rudolph’s nose shining in the distant sky.

In a statement released to press, Claus has encouraged children to head to sleep prior to his arrival to avoid delay of present delivery, and reminded them that they still have a chance to cement their place on the “Nice List” by doing so. Jackson, 7,  from Sydney, noted that in past years, he has tried to stay up to catch Claus delivering his presents, but it seems Claus is aware that he is awake and only arrives AFTER Jackson has fallen asleep.

Claus also highlighted the fact that he enjoys cookies and milk and would be very appreciative of any left out for him in his travels, as going to so many houses makes him hungry! He also states that he has been successful in procuring the present your child has asked him for.

We hope to bring you footage once Santa arrives here, so keep an eye out for updates as they develop! 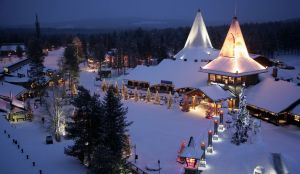