Dog mums are dedicated, but this woman definitely takes the cake after she was pulled out to sea trying to save her dog.

The woman, 54, was at Basham Beach near Port Elliot when her dog ran into the water and became trapped in battering waves. Attempting to save her dog, she was swept 100m offshore and was unable to swim back in.

Thankfully, there were surfers and paddle boarders nearby and they came to the woman and dog’s aid.

The woman and her Staffy named Spud were uninjured.

Surfers have rushed to help a woman and her dog at Basham Beach – the rescue sparked when the dog kept swimming further out to sea. Both of them are now safe and recovering from the ordeal. Details at 6pm @9NewsAdel pic.twitter.com/PEA8gu3UkW

Bella White, a surfer who helped save the woman said to Nine News “She was pretty out of breath you know, she was out there for a bit I think.”

“I paddled out there and I put my board out so she could hang onto that, so at least she was floating until other people got there.” 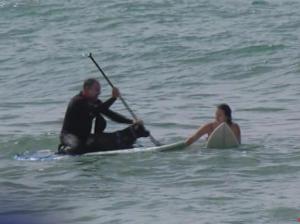 Daniel Willetts from Surf Life Saving SA said it was an important reminder for beachgoers to be vigilant at unpatrolled beaches.

“Thankfully there was a positive outcome with the swimmer being assisted back to shore safely,” he said.

“No one plans to get into trouble, but the ocean can be a dangerous place, especially in remote or isolated locations with unpredictable swells and hidden rips.

“Making yourself aware of the dangers and having a plan should you get into trouble, could save a life.”