But only days ago, it was part of an old four-wheel drive parked in his yard at Torrington, north of the Northern Tablelands township of Glen Innes.

Mr Eveans found a similar piece next to his destroyed motorbike that had been stored in a small burnt-out shed next to his home.

“No, there’s nothing recoverable there,” he said, looking at the charred remains of his property.

“The shed, the caravan parked beside it, the motorbike is gone. There was an aluminium meltdown like you wouldn’t believe.”

Mr Eveans is sporting a burn on the back of his neck after waiting until the last moment to leave town as what he describes as a “five-pronged” bushfire encapsulated the village on Friday.

“The sound – it was like hearing a plane overhead coming into land,” he said. 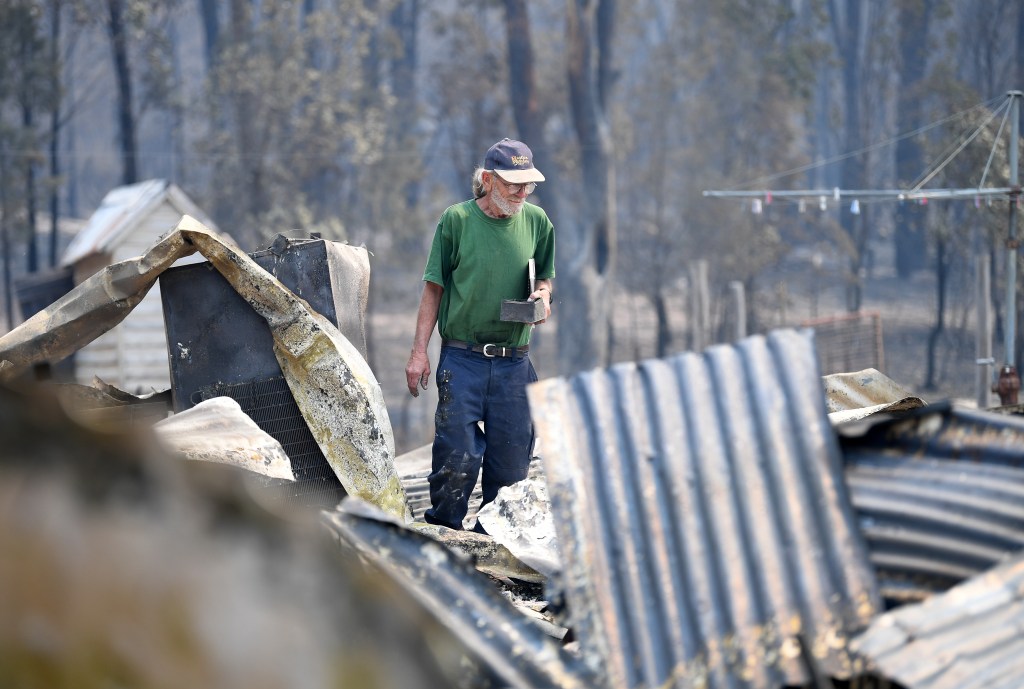 Thomas Eveans inspects the remains of his house (AAP)

But he’s unsure how the wildlife has fared, saying only a third of the 21 king parrots he normally has in his yard turned up on Monday.

Only one of the four kangaroos usually eating on his lawn arrived with clear burns to its feet.

While most, if not all, people were insured, Sonya Law said her niece Fiona has set up a GoFundMe page for the people who have lost their homes.

SES and Fire & Rescue support crews were on the ground on Monday helping counsel the community and listen to their stories.

Some locals are frustrated about what they see as a lack of appropriate hazard reduction burns, saying there was too much growth in the protected forest around the town.