The well-known Australian newspaper has seemingly hit publish too soon on an obituary for Prince Phillip, meanwhile, he is still very much alive.

It was unclear whether the article was published in the wrong section, or if it was in fact a very awkward and premature assumption by the paper.

According to reports from the Royal family, The Duke of Edinburgh is “doing OK” as he remains in hospital for “rest and observation”.

Twitter user ‘Miss Bailey Woof’ shared a screenshot of the article captioning it “Is there something we don’t know @smh?” 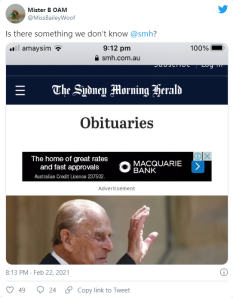 The post has since been deleted and redirects to a blank page.

Now that’s what we call… awkward! What do you think about the premature posting of the article?

The Queen's Stealing The Spotlight From Harry And Meghan

EXCLUSIVE: We Expose The REAL Bryce Ruthven From MAFS