If there’s one thing we know, it’s that US President Donald Trump should stay away from Twitter. It just never seems to end well.

Amid a number of tweets that Trump has made recently about news of his impeachment, the President made a comment about teen activist Greta Thunberg, following her speech about climate change at the UN on Monday.

16-year-old Greta’s speech has gone viral after she called out world leaders for their lack of action against climate change with the repeated phrase, “how dare you”.

In his caption he proved just slightly out of touch by writing, “She seems like a very happy young girl looking forward to a bright and wonderful future. So nice to see!”.

She seems like a very happy young girl looking forward to a bright and wonderful future. So nice to see! https://t.co/1tQG6QcVKO

Now we say “out of touch” because in the speech, Greta is actually brought close to tears as she speaks about how climate change has left her frightened for the future and that her childhood has been taken away from her. Kind of the opposite to what he said in his caption.

So you can kind of understand why people immediately began to troll Donald Trump, including Greta herself.

The teen activist threw subtle shade by updating her Twitter byline to read, “A very happy young girl looking forward to a bright and wonderful future”. No matter whether you support Greta’s views or not, you gotta admit, that’s a pretty epic response.

@GretaThunberg knows how to engage with bullies, deniers and trolls/bots.

Her byline has since been changed back to read “16 year old climate and environmental activist with Asperger’s” but of course screenshots will immortalise the moment forever. 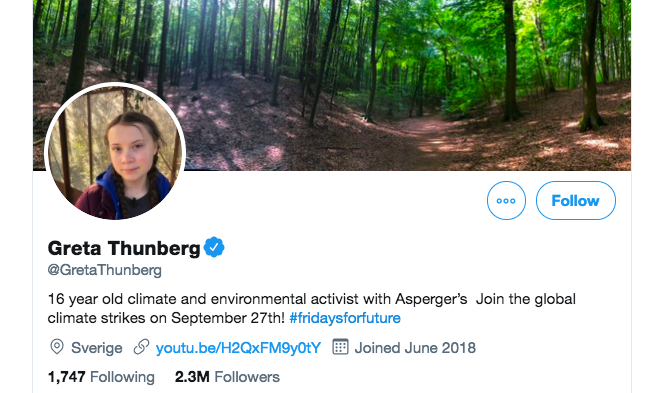 It comes after Greta’s emotional speech at the UN attracted both support and criticism on social media.

You can watch Greta’s speech here.