A young woman has been left shocked after being told that she could not board a Virgin Australia flight because she was showing “too much skin”.

The 23-year-old was set to board the Adelaide to Gold Coast flight on Wednesday morning, but was told by the airline’s ground crew at Adelaide Airport that she would not be allowed to get on the plane.

Catherine Bampton told News.com.au that the she was embarrassed by the way she was informed by Virgin staff about the situation. 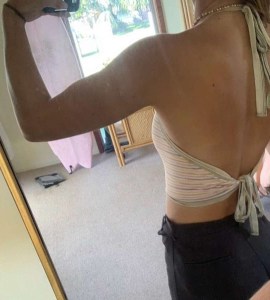 “She told me in front of everyone that the pilot was refusing for me to board the plane because of the clothes I was wearing,” Ms Bampton said.

Ms Bampton says that she sought clarification from Virgin staff about which rules she was breaking, but was simply told that the pilot doesn’t like passengers showing too much skin.

It is understood that Virgin Australia staff felt that the top being worn was unsuitable, their dress code states that suitable footwear, shorts, a skirt or pants and a shirt (including singlets) must be worn to board flights.

The airline is understood to be undertaking a review of the incident.