There are some people who take pettiness to levels that we can only imagine ever reaching.

One cyclist has taken it upon himself to cycle every street of Brighton in one morning before uploading his activity to the popular fitness app Strava and labelling it “The Karen”.

Matt Groot cycled through every street in Brighton, completing the 97km trip in just under 3 hours.

If you’re not sure why that’s petty, you probably need to have a watch of the video that his morning cycle was referencing:

The now-viral video features a Brighton resident (now disparagingly dubbed Karen) explaining to Channel Nine News that the reason she was walking The Tan was because she had “done all of Brighton.”

Under Melbourne’s current lockdown laws, it’s forbidden to stray too far from home for exercise that could be done closer to home.

Which does raise the question of whether or not our satirising cyclist was actually breaking the rules by travelling to Brighton to carry out his 97km cycle. 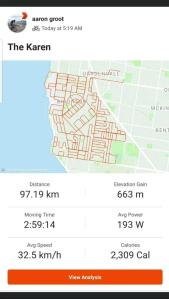 Either way, it’s an impressive time and a lot of effort to go to for a joke.