Every cat deserves a home, even if they are a little touchy-feely… and likely to stink up your whole place.

Animal lovers have been left in stitches after an ad on pet adoption site PetRescue appeared featuring a very unique cat who is looking for a new family. 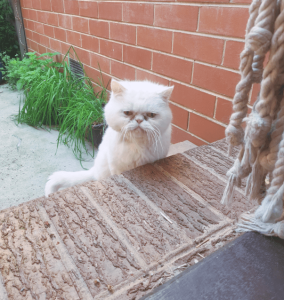 Casper, an 11-year-old white shorthair from Melbourne, is described as having a “deep-seated identity crisis” thanks to his offensive antics.

“There’s really no way to be delicate about this; Casper’s 2 favourite things in life are to pee on everything you love (spreading his manly musk to deter literally anything with a penis from trying to steal his lovers) & then to make it up to you by gently mounting you & aggressively thrusting against your neck (yes that’s correct, he will make sweet love to your neck).” 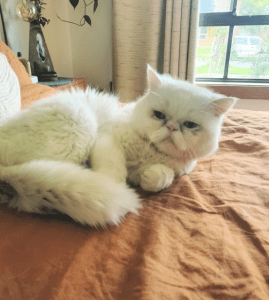 Not only that, but Casper also is known to pee on everything.

“If you have existing cats or cat size dogs, unsupervised inside time for Casper is not recommended; unless you’re fond of ‘Eau De Cat Pee’ stank; seriously, he has no shame & will pee on literally anything should he feel he’s been affronted.”

Casper currently lives in the suburbs but is suited to large outdoor spaces where he can continue to… pee. Seriously, it doesn’t get crazier than this.

“Obviously, as a senior and white cat, the safest life for Casper would be an indoor one, but because of his relentless & unwavering need to pee on anything that stands still long enough, we feel a farm lifestyle would be the most suitable life for him.

“He absolutely loves spending time outside & would be fine with livestock & dogs larger than him but with no other cats; not because he doesn’t get along with them but because this pervy old man can be a bit uncle touchy with no concept of consent. 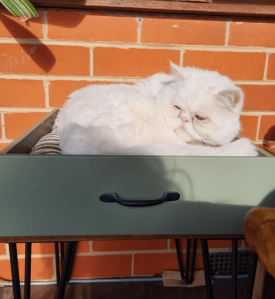 “Casper would like a farm where he can wander and sew his wild pee oats, but still have access to an indoor area to chill with you and to sleep at night.”

Casper also requires medication to deal with anxiety issues, which the author of the ad says is unsurprising due to his identity crisis.

“In return for accommodating his needs, Casper will provide you with unconditional love, lots of slightly creepy massages and a really lovely old bloke for company.”

People immediately fell in love with this old man and have their fingers crossed he finds a home.

This is the most incredible pet description I have ever read. Will anyone in Victoria take a chance on this appalling pervert of a cat? https://t.co/UM7rxUGda1

“We need to get Casper trending. And whoever wrote the ad deserves a promotion at a minimum,” one Twitter user wrote.

“He sounds absolutely awful. Someone will love him,” another added.

Squishies Flat Faced Animal Rescue, who are currently looking after Casper, is currently seeking assistance to help this feline live his best life while he awaits his forever home. If you’d like to help, you can send any donations to: