The internet has reacted to a pair of pink Kmart track pants thanks to their uncanny resemblance to a body part.

The tracky dacks have been doing the rounds online, after it was pointed out that they bare an uncomfortable resemblance to female genitalia.

Kmart’s Slouchy Comfort Pants have been lauded by Kmart because they are just so damn comfy, but many are not so on board with what has been labelled a fashion faux pas. 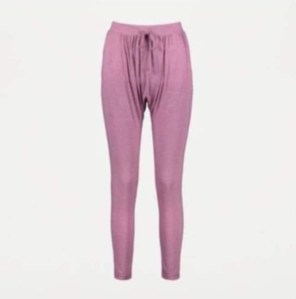 The pink version of the pants as they appeared on the Kmart website.

The track pants are extra slouchy around the waist, which means that excess fabric bunches in the crotch region resulting in lots of folded fabric and umm…see above.

After somebody shared the photo into a Facebook group for Kmart fans, people were quick to jump into the comments to skewer the look.

“Comes with a built in camel toe,” wrote one user.

“I prefer to wear my vagina on the inside of my pants thanks,” added another.

However, not everyone was so critical in their reaction, with some punters pointing out that the pants are indeed very, very comfy.

We’re just not sure we could wear them in public without everyone double-taking.