Alasdair Wilkins shared his amazing weight loss story on Vox.com, but he said how he lost 45kgs in a year is “really dumb”.

The 27-year-old master’s student weighed 129kgs only 12 months ago, but after moving out of his parents house he had a lot more free time – so he thought it would be the perfect time to lose weight.

“Basically, I just went to the gym, and I … walked. On a treadmill, uphill, at a brisk pace, for about an hour every day — and I do mean every day — from July to April. That’s more or less it!” he wrote in his post on Vox.com.

He also said that he didn’t change his diet much, but instead cut down his portion sizes.

“The thing is, though, it was a lot easier for me to hop on a treadmill than to cut portions, at least at first. So I just ignored the (frequently contradictory) mountains of literature on the best way to lose weight and just focused on finding a way that worked for me.”

Alasdair does have one little secret – and that is to take the pressure off losing weight.

“My only real goal was to start feeling a little better about myself. If I had any weight-related goal at all, it was probably on the order of 5 to 10 pounds, and losing 20 would have made me ecstatic.” 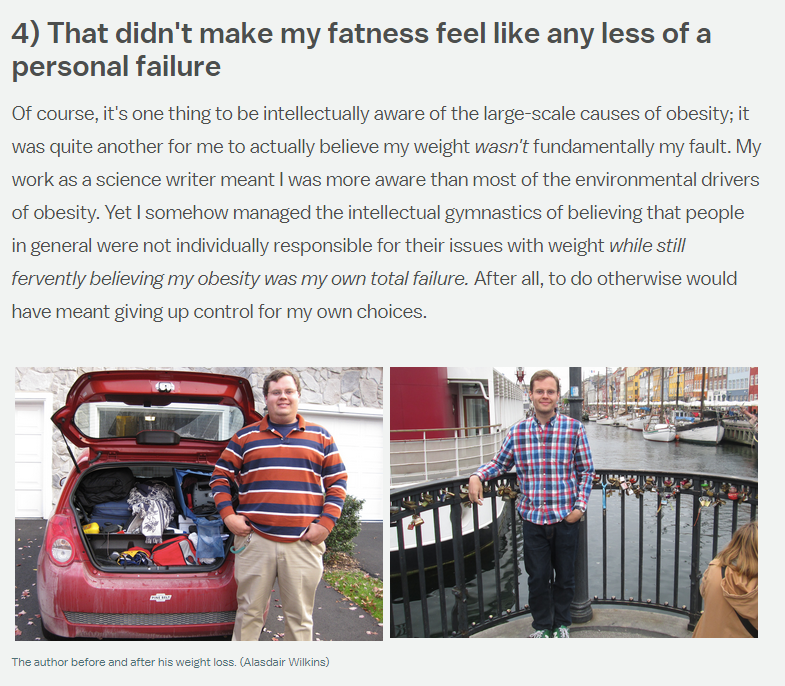 He also said that having access to Netflix on his iPad while he exercies greatly improved his enjoyment.

“I’ve proven fairly conclusively over the first 26 years of my life that my willpower is mediocre at best. Instead, I managed to reshape my environment so that the result was weight loss, rather than continued obesity.”

Since his weight loss, Alasdair is more confident in his own skin.

He told news.com.au: “If you’re overweight or trying to lose weight, I think it’s really important to realise you don’t need to lose all of it immediately to feel better about yourself.

“Around the 27kg mark, that was when a lot of the very tightly held self loathing just started to unravel.”