The way we eat Aussie foods can be a very touchy subject, which is what one woman discovered when she uploaded a very simple image of two slices of Vegemite toast.

In the Facebook group Budget Friendly Meals Australia, which boasts 90,000 members, the Perth mum casually asked whether the majority prefer to enjoy Vegemite and butter on toast – do they while it’s warm or wait for it to cool down so the butter doesn’t melt? 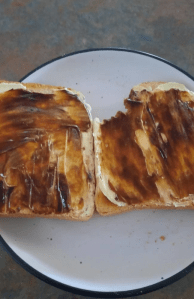 Let’s just say there was some heavy debate…

Many were mortified by the idea that one would let a piece of toast cool down, with one Facebook user suggesting it “should be illegal”.

“This photo is just messed up. Has to be hot toast with butter and Vegemite,” another added.

“Oh good god, what kind of heathen waits for it to go cold?” someone else said.

However, there were other people who actually DO let the toast cool down before layering on the butter.

“Cold, hubby puts it in the freeze for a minute after it’s cooked,” one user replied.

“I love cold toast with cheesy mite,” another wrote.

No matter how you choose to eat your Vegemite – it’s always delicious!

Messina Lamington Sticky Snails Are Available To Order On Monday