Want a beer that is so flavourful that you’ll need a 6-pack just to figure it out? Prancing Pony Brewery has unveiled their new IPA and oh boy, this is one interesting flavour combination.

The beer entitled ‘Freak Show’, is indeed as its name suggests. The experimental IPA was unveiled at GABS Festival in Melbourne and is now available throughout NSW in cans, cartons and on tap. 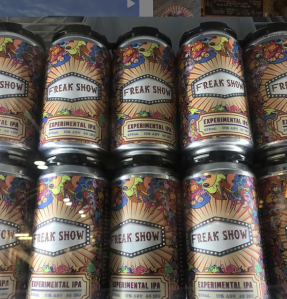 We don’t know where to start with this one as their tasting notes are described “like nanna’s entire spice cabinet in a barrel of hot rum.”

“A spicy, 20 megaton fruit bomb. Think banana split on vanilla ice cream with berries poured in, finished with cinnamon. But wait, there’s more. One half of a dried fig on each side, a hint of cherry, cardamon and a swig of Caribbean spiced rum, topped with a squirt of orange cream, more berries, a clump of candy floss, decorated with a jasmine flower.”

With a limited run, you’ll have to be quick to get your hands on the new concoction as it won’t be brewing again for at least another 12 months!

Have a taste of the Freak Show, available at the following:

Frankies Pizza By The Slice

Get all the info on Prancing Pony Brewing on their website.