People in Sydney are constantly being warned that the price of their avocado smash when going out for breakfast could be costing them their house deposit, but it looks like there could be a different culprit at this one popular brekkie hotspot.

The Grounds of Alexandria in Sydney’s inner-city has come under fire online after one Sydneysider, Nick Stoll, posted a photo of one particular menu item.

He had stopped into the popular rustic eatery to grab a late lunch with his girlfriend when he noticed that the establishment was charging a whopping $10 for a bottle of water.

“You’ve got to be kidding me Sydney?” wrote Mr Stoll alongside a picture of the item on the menu. 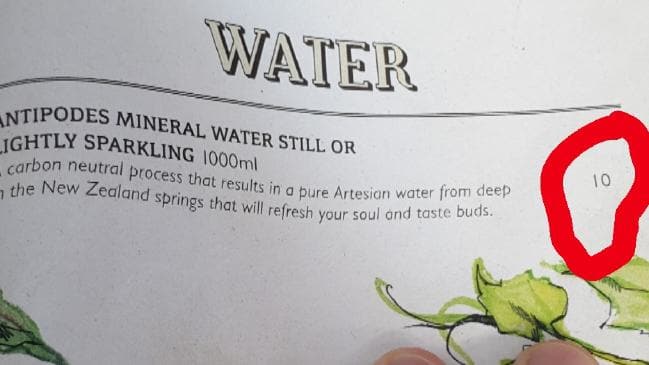 The image immediately attracted responses from other social media users, with many saying that it didn’t really come as much of a surprise given that the item was for sale at one of the most trendy cafes in Sydney’s inner west.

“I mean it’s The Grounds aka ‘that place where you queue for food and need to take on a mortgage to pay for breakfast’ – what did you expect?” joked one commenter.

Of course, as the menu states, this is not just a simple bottle of water. This Antipodes mineral water, which comes in still or sparkling, comes with a lengthy description that attempts to justify the price.

“A carbon neutral process that results in a pure Artesian water (from deep in the New Zealand springs that will refresh your should and taste buds”, it says.

The Grounds has since responded to the complaint, but they’re not apologising for the pricey menu item.

“[It’s] amazing that people have nothing better to do with their time”, they said to News.com.au about the social media rampage.

“Cry me a river (of antipodes pure artisan water) is what I would say first of all, I guess if you want a bottle of this ritzy brew you’re really going to have to splash out,” said the cafe’s brand director.

“For those who don’t want to pay for water, we recommend you tap out (if you know what I mean). We have tap water on offer in all of our venues.”

Some people have also come to the defence of the cafe, saying that Antipodes branded mineral water usually costs $6/litre in the shop and so it’s not ridiculous that a cafe would mark-up the price slightly.

“Antipodes water is typically around $6/litre so it’s not that outrageous at a cafe,” wrote one person.

“Mineral costs wherever you go. If you don’t want it, don’t order it. Ask for tap water,” said another.

But Mr Stoll couldn’t be convinced and was particularly annoyed by the way that the water had been marketed on the menu.

“They are free to sell whatever they want, but whoever pays double digits for water should contact me to invest in some soul-cleansing snake oil I’m flogging,” he said to news.com.au.

“For the record I didn’t try it. Maybe it’s life-changing. Once you pay 10 bucks for water you definitely won’t go back…to that restaurant.”

What do you reckon? On one hand, if it really is life changing maybe it’s worth the ten bucks? But on the other hand, that tenner can probably also get you a bacon and egg roll at your average cafe… Your pick we guess!

Do You Drink Your Coffee BLACK?

You Can Now Try A Bubble O'Bill Inspired Cocktail!