We were massive fans when Coca-Cola decided to release a vanilla flavour of their popular soft drink. We were even okay with the newer raspberry coke edition. But their latest flavour infusion is so random that we’re not sure how to feel…

Over in the UK, Coca-Cola is introducing a new Christmas flavour to their Zero Sugar range and it’s surely going to divide fans of the soft drink.

So what’s the latest fizzy flavour? Get ready for it…CINNAMON flavoured Coke! Yep, we told you. It’s a very odd combination! 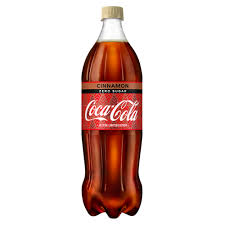 The spice is typically used around christmas time to spice up cookies or pasties, but now the soft drink giant is attempting to add it to our beverages.

Cinnamon Coca-Cola will be available in 500ml or 1.25 litre bottles later this week over in the UK.

“Since launching Coca-Cola Zero Sugar, we’ve introduced an exciting addition of new flavours to the range.

“For a limited time only, we are excited to announce the launch of Coca-Cola Zero Sugar Cinnamon, that we hope our current fans and those looking to try a new flavour will love. It’s a drink full of festive flavour and no sugar, perfect for the lead-up to Christmas.”

And while we’re sure a lot of people might not feel too keen to try it, for those that are thinking, ‘this sounds DELICIOUS!’ we have some rather bad news…

“We are always responding to people’s changing tastes and preferences and we regularly introduce exciting new flavours in Australia such as Coca-Cola Orange No Sugar which is available now,” said a spokesperson.

“There are currently no plans to introduce this flavour here.”

IT’S OFFICIAL. COKE DOES TASTE BETTER IN A GLASS BOTTLE

So if you’ve got a hankering for a spicy flavoured coke, well at this stage you’ll have to purchase a plane ticket to give it a taste.

Otherwise you’ll have to just settle with quenching your thirst with a normal Coca-Cola.

A Harry Potter High Tea Is Coming To Sydney

HJ's Just Stepped Into Uncharted Territory With This Burger

Use Those Strawberries To Make Ice Blocks!