Every now and then you hear about an idea and think ‘why the heck didn’t anyone do this before?’

This is one of those ideas.

Some absolute geniuses have combined the deliciousness of waffles with the quintessential Aussie dessert, the lamington. 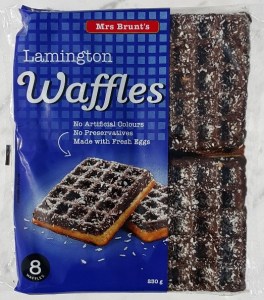 Mrs Brunt’s are those geniuses, marrying dark chocolate and coconut shavings with their fluffy, fresh-egg waffle.

And you can eat them either heated up or straight from the pack, which sounds like the perfect little cheat snack to us.

You can grab a packet of 8 lamington waffles at over 600 stockists around the country, including IGA and Foodworks stores for just $5.50 RRP.