Social media has come for a motorbike rider whose bike was pictured parked between two disabled parking spots at Bunnings in Melbourne.

The photo was posted to the Australian Disability Parking Wall of Shame Facebook page by a member who said the rider claimed he “can park anywhere”.

“I said to [the] rider ‘Good thing I don’t have a wheelchair’,” the poster wrote in the photo’s caption.

“He explained to me that motor bikes can park anywhere, even on foot paths.”

“Besides there is no sign saying NO BIKE PARKING.

“I tried to explain to him how ignorant he was, but it fell on deaf ears.” 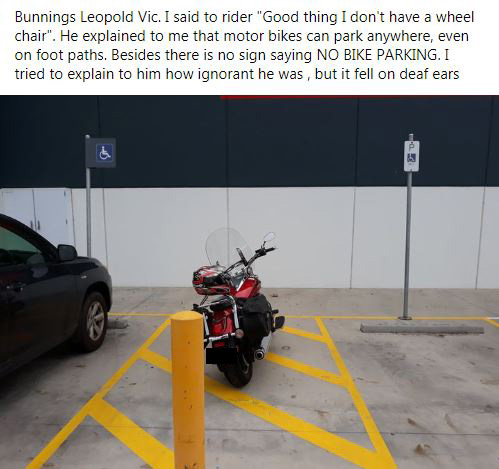 The comments were pretty much as expected but still a bit of a mixed bag.

“There’s also no signs saying “no littering” or “No urinating in public”, so I’ll go ahead and do that to LOL,” was another.

This comment: “If he is breaking the law which he is not (depending on the state and rules ) then let the law deal with it. He will get a fine if he is doing something wrong don’t you think?” was replied with this comment from WA which illustrated how it’s not so clear-cut…

“Unfortunately, in some states no they don’t. Here in Armadale, WA, Rangers cannot issue fines in private carparks and shopping centre security are not allowed to issue fines and the police do not get involved. Therefore, in shopping centre car parks there is sweet FA that can be done about this sort of thing.”

“Look at you all [threatening] to damage the bike. I’m a disable[d] guy that rides when I can and put up with f**k heads like the ones on here. Grow up.”

Thing is, the rider was correct about being permitted to park on the footpath, as long as they don’t obstruct “pedestrians, public transport users, doorways, delivery vehicles or access to street infrastructure (such as parking meters and public bins) and parked cars”, the City of Melbourne website said.

However, the site also said:

“Motorcycle parking is not permitted on the footpath adjacent to any parking bay reserved for people with disabilities (marked with the international symbol of access),” it read.