You chuck a load of clothes in the machine and then when you hang them on the line you notice that a sock that you SWEAR you put in the machine is nowhere to be seen, or your faveroute pair of undies have mysteriously disappeared!

You know that they didn’t just grow legs and walk away, and now, a woman has discovered where her missing pieces of laundry have ended up, in a secret compartment in the machine itself! 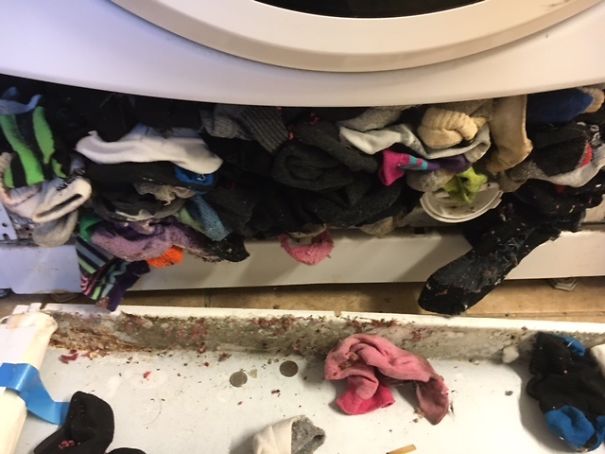 Cathy Hinz, who manages a manufactured home park in the US told Bored Panda her husband made the amazing discovery after he tried to fix a washing machine instead of calling in a professional.

After he took the machine apart, he removed the bottom panel and found literally dozens of misplaced items that had been trapped inside.

When he took out the water pump, he also found around $7 in loose change.

Cathy revealed, ‘Now, for those of you that SWEAR, your machine eats your small things, and have been told by ‘professionals’ and others that this fable just is not true… Here is the proof!’

‘So next time you are missing socks, just remember! That washing machine might just be hungry!’ she added.

TRENDING: The Most Awesome Thing Your Washing Machine Can Do

Diy - Light up your house

This is why you should make your bed every morning