ALDI customers have implored the supermarket to dial back the speed at the checkout after a woman witnessed an elderly shopper struggle to keep up.

In a post on Aldi Australia’s Facebook page, the woman said she could only look on as the shopper, who refused her help, became overwhelmed with the supermarket’s “rush in, rush out” approach.

“Once her goods were beginning to scan the cashier was going so fast, I could see the poor lady struggle to put it back into her trolley, by the time she walked a short distance to the end of the cashier table, a third of her goods were sitting there already,” she wrote.

“The cashier had to stop scanning as there was no space left… the queue had built up so far, despite this the cashier didn’t call for another register to open.” 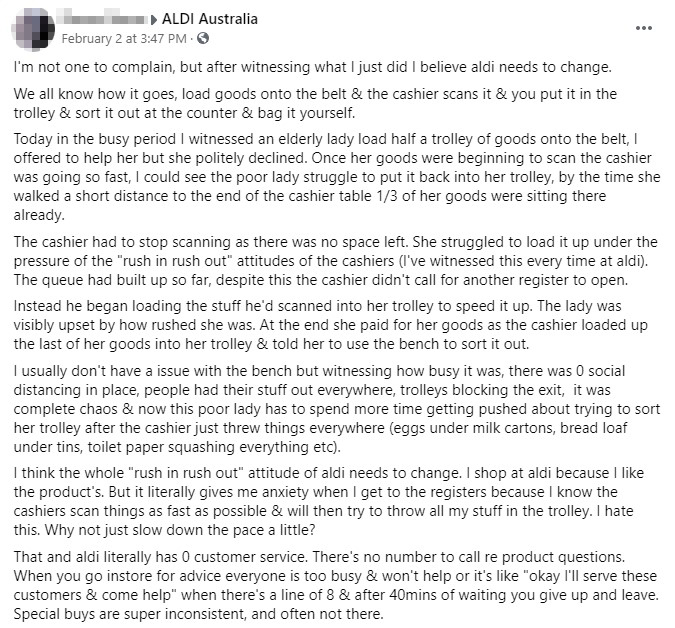 She said that the cashier began to load the things he’d scanned into her trolley, however the elderly woman was “visibly upset by how rushed she was.”

“At the end she paid for her goods as the cashier loaded up the last of her goods into her trolley and told her to use the bench to sort it out.”

She described the scene as complete chaos.

“The poor lady had to spend more time getting pushed about trying to sort her trolley after the cashier just threw things everywhere (eggs under milk cartons, bread loaf under tins, toilet paper squashing everything).”

While she admitted she likes Aldi’s products, the woman said that she experiences anxiety while approaching the checkouts.

“I know the cashiers scan things as fast as possible and will then try to throw all my stuff in the trolley. I hate this. Why not just slow down the pace a little?” she wrote.

Aldi responded to the post, saying they’d look into it further, however a spokesperson told Yahoo News Australia that staff adjusted the speed they scan groceries based on each individual shopper.

“If any customer would like an Aldi employee to slow down at the checkout, we encourage them to kindly request this. Our stores are designed to ensure customers can do their weekly shop in an efficient and convenient way,” they said in a statement.

“One way we can do this is by asking customers to place their groceries back in their trolley once they have been scanned, and then pack at their own pace at the long bench behind the tills.”