The actor took to Instagram to introduce to the world his on-screen son, Zoolander Jr., who will be played by Cyrus Arnold.

The pic shows Stiller, 49, in his complete Zoolander garb, cruising along in a red convertible beside his mini-me. The caption reads: “Meet @cyrusarnold. Son of Derek. #Zoolander2.”

Cyrus is mostly known for small television roles, and also appears in films About a Boy and Richie Rich, but the up-and-coming actor has three major features coming up, including Hardcore later this year, starring Sharlto Copley.

No word yet on who Derek Jr.’s mother might be but Will Ferrell is all-but-confirmed to return as Mugatu, with Stiller’s wife Christine Taylor returning as Matilda and Penélope Cruz on board as well.

It’s been nearly 15 years since we last saw Stiller as Derek Zoolander and Owen Wilson as Hansel on the big screen. Last month, the duo made a surprise appearance at Paris Fashion Week, hitting the runway for Valentino in character which earnt them a standing ovation from the crowd.

This time around, Stiller is directing and co-wrote the script with Justin Theroux.

The sequel is slated to hit theatres in February 2016. 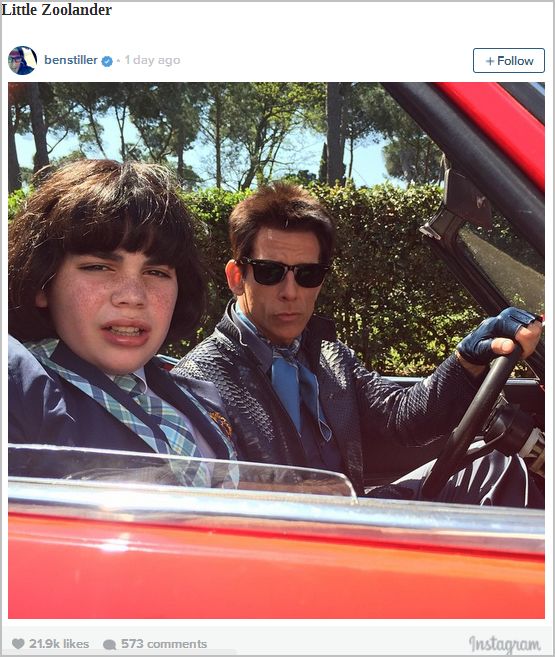