Madeline Stuart is an 18-year-old model with Down Syndrome, and she will be walking at New York Fashion Week.

Her story first went viral earlier this year, and she and her mum Rosanne had been inundated with modeling requests.

She’s signed to walk for MODA in NYFW and will be the face of a line of handbags called EverMaya. 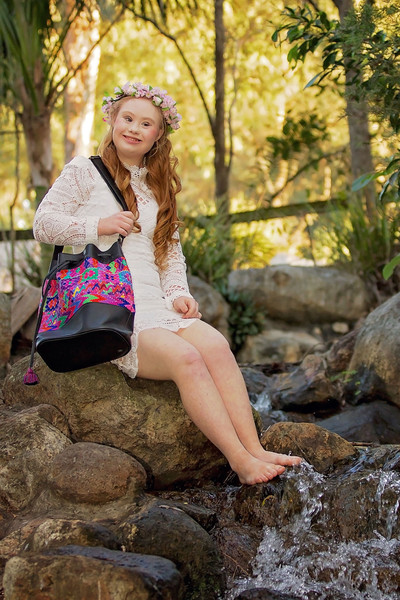 Her mum spoke to Cosmopolitan about their mission to change the perceptions of intellectual disabilities, we’ve gathered five of our favourite inspiring quotes that will make you rethink any modelling misconceptions you might have…

1. “When Maddy was born, I can remember walking around the street with people abusing me saying she should be in an institution, and that was 18 years ago!”

2. “Madeline really chased it. She wanted this and she worked hard for it. I’ve done everything I can on the business end to get her to this stage. Now it’s just her working her charm.”

Off to JFK to fly home

3. “The world was ready. The world wants to be inclusive, it just hasn’t had anyone on such a platform that they were able to do it easily. Everyone’s going to want that friend to teach them what true love is.”

This is the new bag by EverMaya it is called “The Madeline” and the amazing thing is 5% of the sales go to the National Down’s Syndrome Society  NDSS so if you love it please go to EverMaya’s website, they are tagged in the picture and buy one, plus if you don’t like it which I think is very unlikely as it is gorgeous then buy one for someone you love. It is a wonderful charity, very dear to my heart and we need your support. #downssyndrome #bts #madelinesmodelling #lovinglife #fun

5. “The thing I’d like people to take away from this is to not discriminate. Don’t judge a book by its cover. I would just like people to accept, love, and show kindness. That’s all this is about for us. The modeling is fun and everything, but it’s just a vehicle to get the message out. I think that’s why she’s done so well, is because this isn’t about us. It’s about fighting the fight for all the people out there that are a bit different that need to be loved.”

6. “I will never let anyone be negative toward Madeline. She doesn’t understand what discrimination is. I’ve never let her be exposed to it. If you can believe in yourself, you’re going to hold your head higher. That’s why people love Madeline. She will walk into a room and not judge anyone. I wish I could be more like my daughter.”