Sandra Bullock is People’s “Most Beautiful Woman” for 2015. The selection was revealed on Wednesday morning, with the release of the new issue of the magazine.

The Oscar winner, 50, admits to laughing when she found out she was chosen for the annual honour. “No, really. I just said, ‘That’s ridiculous,’” she tells the magazine. Bullock shares her perspective on beauty with the outlet, saying that it’s less about how a person looks, and more about what he or she does. “Real beauty is quiet. Especially in this town, it’s just so hard not to say, ‘Oh, I need to look like that,’” she says.

Bullock continues, “No, be a good person, be a good mum, do a good job with the lunch, let someone cut in front of you who looks like they’re in a bigger hurry. The people I find most beautiful are the ones who aren’t trying.”

And the star, who is a single mum to Louis, 5, reveals her son has a similar take on beauty. “I was putting him to bed and told him that even when I’m old and grey and more wrinkly than I am now, I’ll still love him and want to tuck him in,” she recalls. “And he asked why I have wrinkles, and I said, ‘Well, I hope some of them are from laughing so much.’ And he touched my face and said, ‘You’re not old, you’re just happy.’”

As “Most Beautiful,” Bullock follows in the footsteps of Lupita Nyong’o (2014), Gwyneth Paltrow (2013), Beyoncé (2012), and many more of the world’s biggest stars. The new issue, with Bullock’s full interview, hits newsstands Friday. 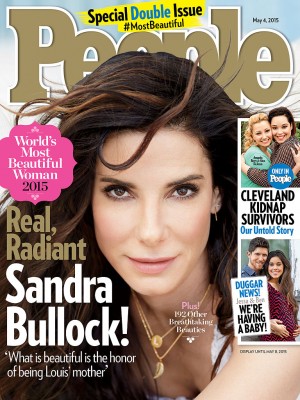