Robbie Williams showed off his talents as an auctioneer on Wednesday as he took over the sale of his personal items in London.

The 41-year-old Angels singer made a surprise appearance at Bonhams in an effort to get the best bids for his memorabilia, including the handwritten lyrics to his Kylie Minogue duet Kids – and he was also stunned when he recognised one of the bidders.

When Brazilian fan Barbara Veras, 26, raised her hand at the auction, Williams appeared distracted and said, “Haven’t I kissed you during a gig? Are you Barbara? Is your name Barbara? Nice to see you again, you normally wear really red lipstick and are at the front of the shows.

“It’s nice to meet you, glad we’ve had a chat now because we kissed first and now we’re chatting,” he added.

All proceeds from the auction will benefit the Donna Louise Children’s Hospice in the pop star’s native Stoke-on-Trent, England.

Williams is a patron of the charity. 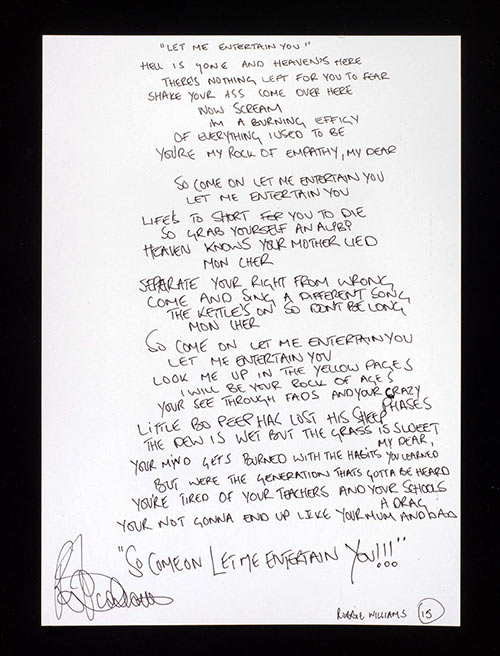 Above: Robbie’s hand written lyrics to ‘Let Me Entertain You’