A hospital worker claims to have taken a photo of a ghostly figure near a children’s ward at Leeds General Infirmary in the UK.

Andrew Milburn was texting his girlfriend on Friday night when, to prove he was actually at work, he sent her a Snapchat of a corridor.

He reportedly had no idea that a ghostly figure appeared in the photo.

Milburn told the Mirror in the UK: “My girlfriend asked me to prove I was at work so I sent her a picture as I walked to my office.”

“Unbeknown at the time it appears that I captured a ghost figure in the corridors.

“I have since put this picture on Facebook, it has received thousands of likes and comments and has been shared as far as America.

“It has also been shared on to paranormal investigator groups, many of which believe the picture is real.”

The 21-year-old only recently returned to work after a break, and said a number of colleagues have heard footsteps where the ghost was when no one was there. 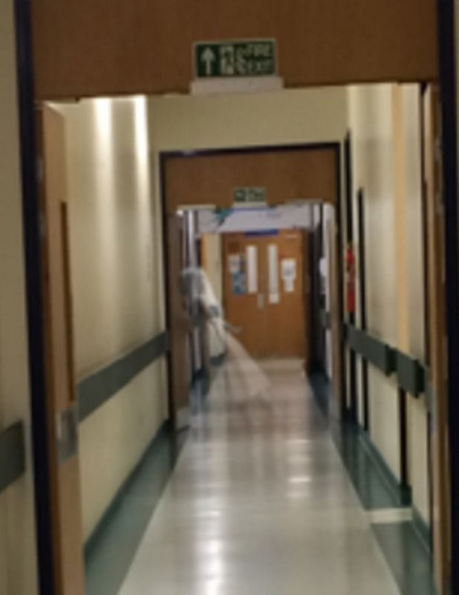 Some Facebook users who have seen the photo claim the image has been tampered with, or put through an app called Ghost Capture.

He has since spoken to the Independent,

“A lot of people have claimed this is fake, I don’t blame them. I can promise that there’s been no ‘photoshop’ or ‘ghost apps’ used.

“We’ve heard footsteps at work and not seen anything there, we’ve never thought much into it until now, it’s definitely fair to say we are a little apprehensive on our night shifts.”

Since the story blew up, Milburn is also dealing with the perils of becoming an instant celebrity.

He has been accused of cheating by the public and his girlfriend has been called “controlling”.

“She’s really upset! She was devastated that she’d been portrayed like this when it wasn’t even anything to do with her. It’s been shared as far as Perth now and even there people are calling her controlling and saying I need to get rid of her,” he told the Independent.

Milburn has been engaged to her since 2010 and is the mother of his two-year-old daughter.