Married At First Sight’s Martha is open about her plastic surgery, but we’re not too sure she’ll be stoked about this throwback photo making the rounds!

There’s been quite a change in Martha’s look from 6-years-ago as the photo from 2013 shows a much more ‘good girl’ style to the sassy MAFS star. 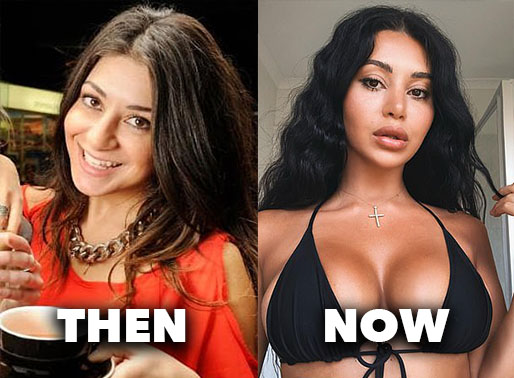 The 30-year-old has been open about what cosmetic and surgical procedures she’s undergone to achieve her bombshell look now.

Before and after photos show the Married at First Sight ‘bride’ went from a girl-next-door to a busty bombshell over a six year period.

Martha’s undergone a nose job, breast implants, facial fillers and botox to look how she does now.

‘I don’t have fillers in my lips – but I do have them in other places on my face. And I’ve had my boobs done,’ she previously told NW magazine.

‘I do Botox but I like to keep it really understated and natural, so I don’t like to look like I’ve had anything done. If you can tell you’ve had it done, then it’s gone wrong.’

Martha – who is ‘married’ to Michael Brunelli, has a nose job in common with her husband, as we saw them both admit to the procedures on the show.

@mbrunelli honey what do you call this look… dying to know??? #MAFS

Martha’s also spoken about the importance of knowing when to stop when it comes to cosmetic surgery.

‘Knowing that there’s a line is important,’ she told 9honey.

‘You have to draw a line and I didn’t actually have some major makeover. I just had some some minor tweaking. On my Instagram and my Facebook, I still have photos of what I looked like before and a lot of people can’t tell the difference. It’s minor.

You do you boo!

The Once Upon A Time In… Hollywood Trailer Is Here!

Jess Said She'd Do What To Get Dan???

The Fleetwood Mac Tour Is Expected To Gross How MUCH?!