A Russian engineer has sliced into his hand all to avoid the pain of forgetting his wallet.

Vlad Zaitsev slipped an NFC chip under his flesh on his left hand, so all he has to do when he catches public transport is put his hand on the scanner.

He also added access to his work building to the chip as well and hopes to add his credit card chip, so he will virtually never forget anything.

“I can’t imagine anybody stealing my credit card if I have implanted under the skin of my hand,” he told Express.

“It is the perfect solution to not have to worry about losing an expensive season ticket, […] although I admit it’s not going to be everybody’s cup of tea.” 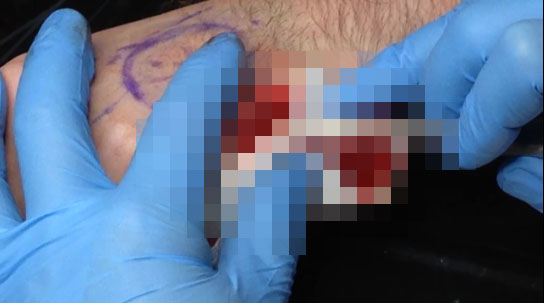 Mr Zaitsev said he put the transport card chip in a small disc of silicon before implanting it inside of him.

This should stop the chip becoming infected or reacting negatively inside his body.

However – the Russian engineers has admitted that his futuristic plan has not been as successful as he had initially hoped, with some scanners not strong enough to pick up his signal.

The contactless card can be recharged in local shops.

You can watch the video of the insertion, but fair warning the content is GRAPHIC.