Lady Gaga has put a US$500,000 reward on the table for the return of her two French bulldogs after they were stolen from her dog walker in Hollywood.

Gaga’s dog walker was shot in the chest before the two bulldogs, Koji and Gustav were stolen. 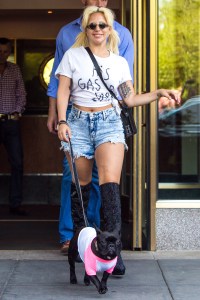 The Academy Award and Grammy winner put the half million dollar reward “no questions asked”, offering a gmail address for those with potential leads to get in touch.

Lady Gaga has been in Rome filming a movie, police say that it is not yet clear whether the dogs were targeted because the thief knew they belonged to the singer.

French bulldogs have been growing massively in popularity over recent years, with some puppies costing several thousand dollars. There have also been several recent reports of the dogs being stolen for their huge resale value.

What Do You Think Of Jonesy & Amanda's Rap Names?

Did You Know That MAFS Bride Booka's Heavy Metal Band Has A HUGE Following?