Christmas Day is supposed to be one of joy and celebration.

It is not supposed to be one of disappointment and soul-shattering memories.

However, for one woman, Derri Burdon, her Christmas lunch experience was anything but magical. At the Whistling Wren in Leigh, Greater Manchester, Derri paid 45 pounds, 90 AUSTRALIAN dollars on THIS meal, according to a report on the Daily Mail.

She was promised a ‘luxury Christmas meal of turkey with all the trimmings’, but instead was served up this dry, downright depressing plate of food. 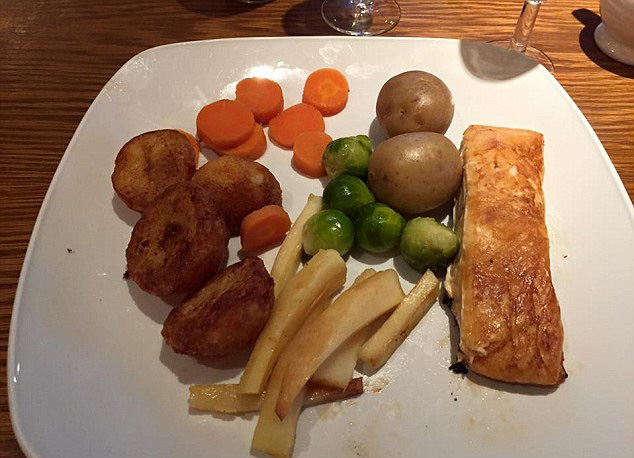 She decided to take to Facebook, to ask the question; ‘If you paid £45 for a Christmas Day meal would you be happy to have been served this? She told her friends, ‘We were at the Whistling Wren in Leigh.

I have complained to Marston’s but was told the meal was as they would expect apart from it being served on the wrong size plate (I expect the plate should have been smaller). ‘

The service on the day was awful too. The table didn’t have a cloth and was set as it would be on a normal day. Not the stuff memories are made of.’

People who shared the post said they ‘felt like crying’ and described it as ‘saddest Chrimbo dinner I’ve ever seen.’

Another said, ‘disgusting at any price.’

A spokesman for Marston’s Brewery said Ms Burdon had been given a full refund for her meal on the day and said the price included champagne on arrival, starter, main, dessert and coffee and mints, which was not captured on the photograph.

Bruce Millington, area manager of the Whistling Wren, said: ‘We are very sorry that the customer in question was not happy with her experience with us at the Whistling Wren on Christmas Day. ‘It was obviously not our intention.

She did complain at the time and received a full refund for the four-course meal worth £40 per head before she left the pub on that day.

‘We have been in dialogue with her directly since and will continue to liaise with her on a one-to-one basis as required.’