Geoffrey Edelsten, 75, and Gabi Grecko are back together as a couple, with the much younger Grecko, 29, set to return to Australia to reunite with him.

Edelsten, 75, told news.com.au that he and Grecko have reunited after getting marrying in 2015, but never officially divorcing:

“We are back together now,” he said

“It is only her career that is keeping her in New York City, and as soon as the end of November, when she will have finished her latest music video, she will come back to Melbourne,” he said.

MORE: GEOFFREY EDELSTEN SHOWS OFF HIS BEST ASSETS ON SET

“She has changed a lot in the three years since she went back to New York City.”

“Her music career is going very well, and secondly she is much more mature.” 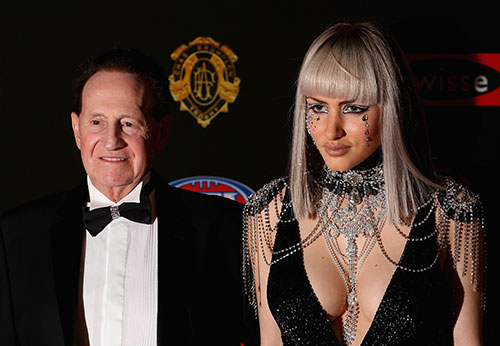 “I went to Los Angeles and brought her down from New York to meet a lot of my friends, because I used to live in LA,” he said.

“Then I went to New York City and saw her again, and we did lots of fun things I must say. “

Hugh Jackman Looks Like Tony Abbott In His New Movie

Did Amanda Win Flashback With The Daggiest Song Yet?

Jonesy & Amanda With Members Of The Kingdom Choir