We’re all constantly reminding everyone to wash their hands at the moment amidst the coronavirus pandemic, but now viewers of The Voice feel like they have to remind one of the celeb coaches to wash her feet!

You’ve probably noticed that from time to time, Delta Goodrem and Kelly Rowland chuck off their heels and walk around in bare feet during filming of the show.

Which typically we’re a big fan of because all females can surely relate to that feeling where your feet are in incredible pain and the relief when you step out of the heels.

Delta and Kelly were sitting in a chair together with their bare feet up leaning up on the desk in front, giving viewers a full on glimpse at the bottom of them. And well, Delta’s were kinda grubby! 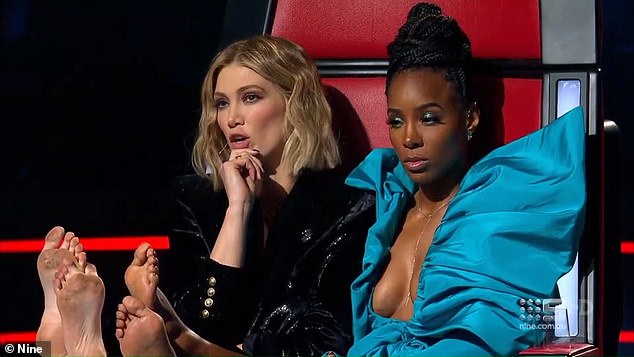 “Can delta Goodrem wash her feet before sticking them in a camera lens?” wrote one person on Twitter.

“Delta Goodrem’s feet tho…” another said with some vomiting emojis.

“Maybe Delta Goodrem you should keep your feet on the ground,” someone else said.

Now look, we’ll admit that Delta’s feet are visibly dirty in the footage, BUT in her defence, it’s likely because she’s previously been walking around the set without her shoes on, not because she just doesn’t wash them.

So she probably had no idea that they looked like this and that they were on full display to the audience at home. Poor Delta!

Also side note, how gross are feet in general?!