It’s becoming more and more common for expecting mums and dads to find out the sex of their baby before they’re born with gender reveal parties becoming the new norm.

But is it actually possible to determine the sex of unborn baby before a doctor performs that 20-week ultrasound?

While some old wives tales claim that you can tell just by the way the mother is carrying or by how much morning sickness they experience, one chart that has surfaced online claims to be able to determine the sex just by using a few statistics.

Is It Possible To Predict The Sex Of Your Unborn Baby With This Chinese Baby Gender Chart?

The Chinese Baby Gender Chart uses the age of the mother at the time of conception, cross referenced with the month that the child was conceived to predict whether it will be a boy or a girl.

One mum brought the chart to people’s attention after posting it in a closed Facebook group. She asked other mum’s if the chart was accurate for them, like it had been for her and her friends. 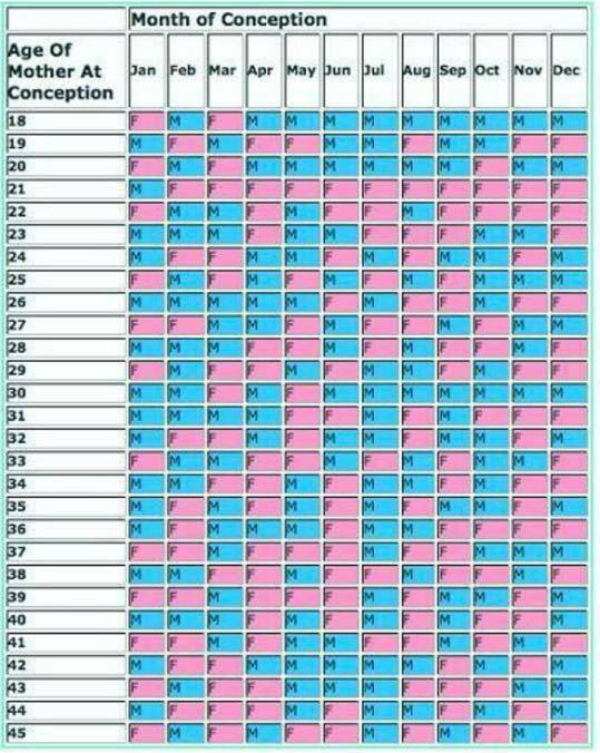 “Would love to know who figured this out if it is spot on,” she said in the post.

The answers were filled with surprised mothers who expressed their shock at just how accurate the chart was for them. However, there is one crucial detail missing that could change all of these responses.

Being a Chinese chat, it’s actually based on Chinese astrology which requires people to determine their age and the month of conception based on the lunar calendar, which is where February’s Chinese New Year comes from, meaning the answers may be slightly different.

While this sounds far too complicated for us to work out ourselves and would take way too much effort, thankfully a Chinese Astrology website have done the hard yards for you and created a converter and gender calculator, to help you use the baby chart with your lunar age and month of conception.

So if you’re pregnant right now or have had a baby in the past, go and check it out and see if it actually works for you!

Of course, it sort of goes without saying that this chart is no where near as accurate as an actual scan by a doctor seeing as there is basically no scientific evidence behind it, so we don’t really recommend you using this chart as the basis for your gender reveal…

But of course, there’s no harm in playing along and having a bit of fun! You could even use the chart at sleepovers or as a game at baby showers to predict what your future baby could be!

We Talk Science With Adam Spencer

We Say Goodbye To Keegan

Hundreds Of Pieces Of Kfc Popcorn Chicken Wasted After Crash