Bindi Irwin’s birth may be the biggest event since… well ever. The entirety of Australia is as a part of this child’s life whether they know it or not.

Bindi has excitingly revealed that she and Chandler are releasing a ‘special project’ that they have been working on for months alongside Australia Zoo – an adorable range of ‘Baby Wildlife Warrior’ clothes and items. 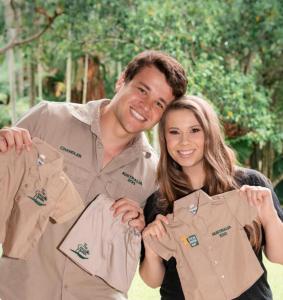 ‘Warrior range means so much to us, we hope you love it too!’, she said in her post.

Bindi also teased when her due date is. Although there are rumours that Bindi has already given birth and is pulling a Kylie Jenner on us, Bindi’s Instagram post says that her due date is “about a week away.”

Her absence on social media prompted her secret birth story. On Sunday she posted a throwback photo, which again put people into a frenzy thinking that she’s covering up the fact that she’s already given birth.

The AWKWARD Moment Kochie Walked In On Jonesy IMPERSONATING Him

"Will You Be Angry?": The REAL Reason Why Natalie Barr Accepted Her New 'Sunrise' Role

Daryl, Sonia & Original 2004 Lineup Confirmed For ‘Dancing With The Stars: All Stars’

P!nk Announces New Documentary 'All I Know So Far'