The upcoming sci-fi comedy Pixels could re-ignite our passion for some of the most addictive 1980s arcade games.

The film features one bad-ass Pac-Man gobbling up fire engines and Donkey Kong going ape as he tosses barrels around.

It also references Tetris and Space Invaders and Frogger have been licensed for the film.

The 1980s was the golden era of coin-operated arcade games and it even got the point where a song, based on the video game Space Invaders, reached the top 10 in 1980.

So what were some of the biggest and most popular coin-operated arcade games of the 1980s?

Revolutionised the video game industry and was a massive hit in the 1980s, especially when it was available for gamers on the Atari 2600 consoles. An Aussie duo (Player One) even wrote a song, Space Invaders, which made the top 10.

A pop culture classic, it appealed to both genders because it was one, of the very few in its day, where the player did not have to shoot and kill to survive. Just steer clear of ghosts, gobble dots and if you happened to steer Pac-Man into one of the four power pellets, he gets a short amount of time to eat the ghosts. The game also spawned the equally popular Ms Pac-Man!

Another game which did not rely on shooting and required a higher skill level because the player had to climb ladders, negotiate platforms, clear obstacles and dodge barrels thrown by a giant ape. It’s also considered one of the first video games with a story narrative as the player has to save a damsel who has been taken by Donkey Kong.

Involves frogs crossing a busy road to get home and navigating a river full of hazards. Another one that appealed to both genders. The game was also the title of an episode of the TV series Seinfeld in which George visits a soon-to-be-closed restaurant and finds a Frogger machine. He tries to cross a busy New York street, just like the game, with the machines and losses out.

A spaceship based shooting game which was the sequel to, and more popular than, Galaxian. It is one of the most successful games from the golden era of video arcade games and was another that was a huge hit on home game consoles.

Check this out! Jonesy & Amanda have been turned into 80’s video-game like characters as part of the movie’s promotion, it’s a pretty good likeness! 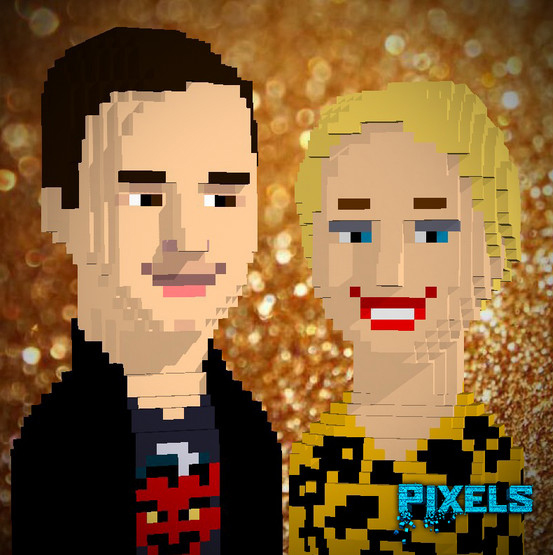