A three-year-old Aboriginal girl has been victim to racial abuse at a Disney-themed event in Melbourne.

Samara dressed up as her favourite Disney character, Queen Elsa from Frozen, but was left in tears after being verbally abused.

Her mother Rachel said the pair were lining up for the snow pit, when another mother and her two daughters started to verbally abuse the three-year-old.

According to Rachel, the woman in front of her turned to her and said: “I don’t know why you’re dressed up for, because Queen Elsa isn’t black [sic]”.

“I asked the woman what she meant by the comment and then one of the woman’s young daughters screwed up her face, she pointed at Samara and said ‘you’re black and black is ugly.’

“I looked around the line and there were little girls of all different races lining up dressed as their favorite Disney characters. We were in Melbourne, one of the most multicultural places in the world. I couldn’t believe it,” Rachel told The Courier. 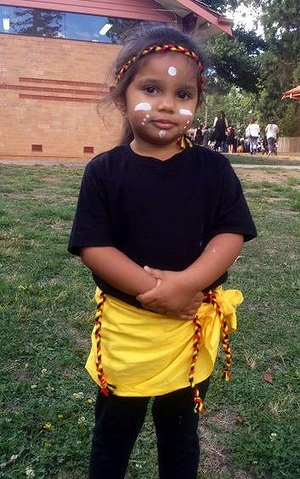 They refused to stoop to their level, brushing off the abuse, but days later Samara didn’t want to go to her Aboriginal dance class.

“I told her ‘because God gave you that skin colour, because you’re a proud blackfella like mum’.”

She wrote a Facebook post about the incident and within a few days it had been shared more than 1300 times.

“The saddest part of it all is that racism is alive and well and the next generation are being subjected to it,” Rachel said. “Nobody is born into this world a racist. It is learnt behaviour. It can be changed.”